One giant room for 2800 Facebook employees – designed by Frank Gehry

Facebook has announced its new plan to build an expansion of its Menlo Park campus. The whole new campus is designed by the architect Frank Gehry that will closely work with Facebook environmental design manager Everett Katigbak to produce a green vision of a campus expansion. 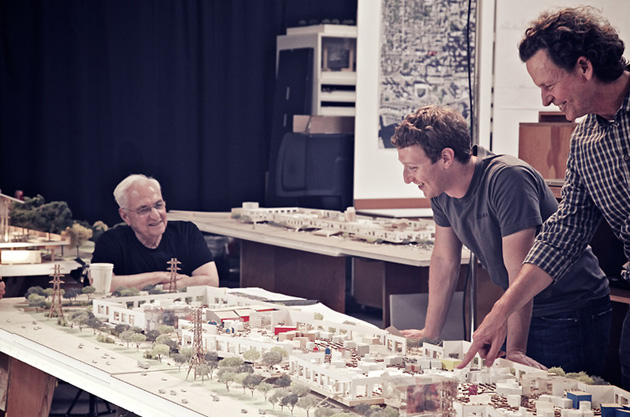 The whole campus has been designed to take into account Facebook’s way of working and culture. It is one large office that will be broken up by conference rooms and break-away spaces, with a parking structure underneath. There will be a rooftop garden, as well as a ground level one. The building is designed to be almost like a „…one giant room that fits thousands of people, all close enough to collaborate together.“ – posted Mark Zuckerberg on his own Facebook timeline. The place will hold up to 2,800 employees and will be an engineering-only office. The new tunnel under the highway will connect the existing Menlo Park campus and the new one.

Design of a new Facebook campus by Frank Gehry.

„We’ve paid just as much attention to the outside as well.  The exterior takes into account the local architecture so that it fits in well with its surroundings.  We’re planting a ton of trees on the grounds and more on the rooftop garden that spans the entire building.  The raw, unfinished look of our buildings means we can construct them quickly and with a big emphasis on being eco-friendly.“ , wrote Everett Katigbak, Facebook environmental design manager, in a blog post on the Facebook Menlo Park page.

Next The Architecture Biennale opens today on COMMON GROUND