During the darkest time of the year, the city event Lux Helsinki reveals a new side to some of the most famous buildings in the city centre and urban spaces that are undergoing transformation. The light is loose from the 4th to the 8th January by 13 light installations that cast a new angle on familiar landmarks of Helsinki. 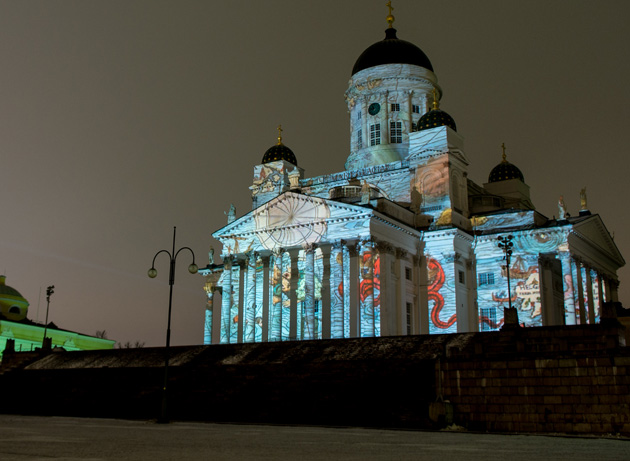 Installation Emergence has been inspired by the proximity of the sea and transforms Helsinki Cathedral into a place where the clouds and sea merge with each other. Light Design: German artist duo Casa Magica. Photo: Hannu Iso Oja.

One of the main stages for Lux Helsinki 2013 is Senate Square, where Helsinki Cathedral is transformed by a video projection in a mystical spectacle by the artist duo Casa Magica. 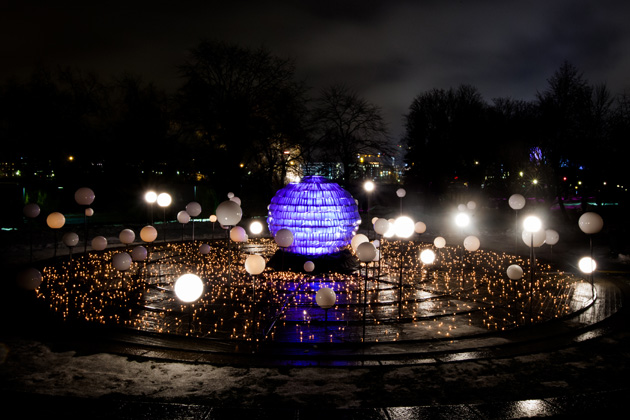 The Amphitheatre at the Finnish National Opera is the scene for Cosmogole, a light and sound installation by French artist Philippe Morvan. A central sphere measuring 3 metres in height is surrounded by 1200 light sources, resulting in a solar system with a 14 metre diameter. Photo: Hannu Iso Oja. 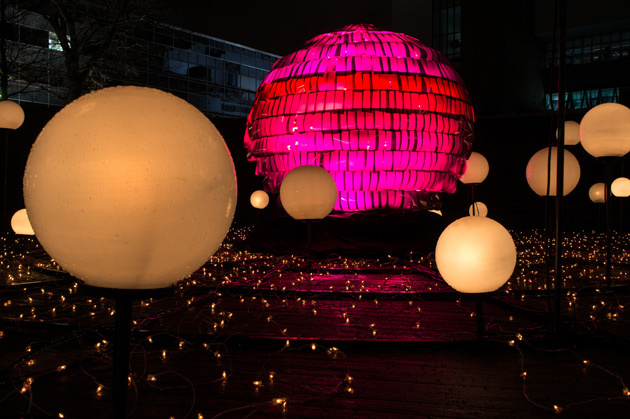 The light installations are being designed by Finnish and international artists, including artists and artist groups from France, England and Hong Kong. They are lighting up a route stretching from the Olympic Stadium to Baana via the Amphitheatre at the Finnish National Opera, Hesperia Park, Kansalaistori and Kiasma. 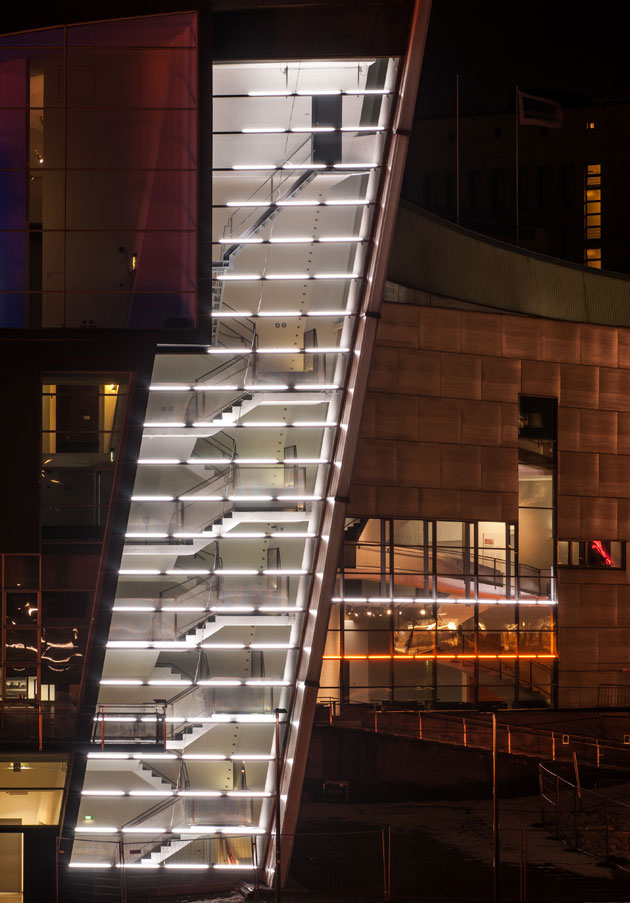 “Linear Array” is a spatial light installation that has been created by Heikki Paasonen and Jani-Matti Salo. Hundreds of fluorescent lamps light up the façades of Kiasma and Sanomatalo, highlighting the architectural rhythms and forms. All the lamps used for the installation are recyclable. Photo: Hannu Iso Oja.

This event organised by the City of Helsinki, invites you to see Helsinki from a new angle – it can be enjoyed in small portions while strolling through town, or it can be viewed in its entirety like an exhibition. 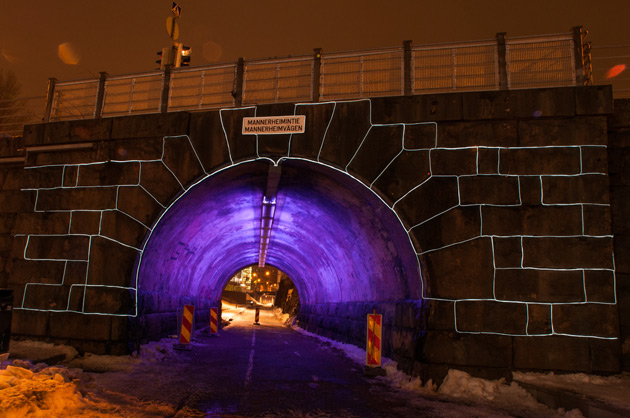 In Mika Haaranen’s installation “Memory of Stone”, a strip of light follows the shapes and forms of the granite rock at the “gateway” to Baana, highlighting the surfaces of the stone bridge and the granite architecture in surprising ways. Photo: Hannu Iso Oja.

“Lux Helsinki presents light installations that go a step further than simply illuminating facades. The route of the installations has been planned to allow members of the public to see and experience as many of the works of art as possible in a convenient way. 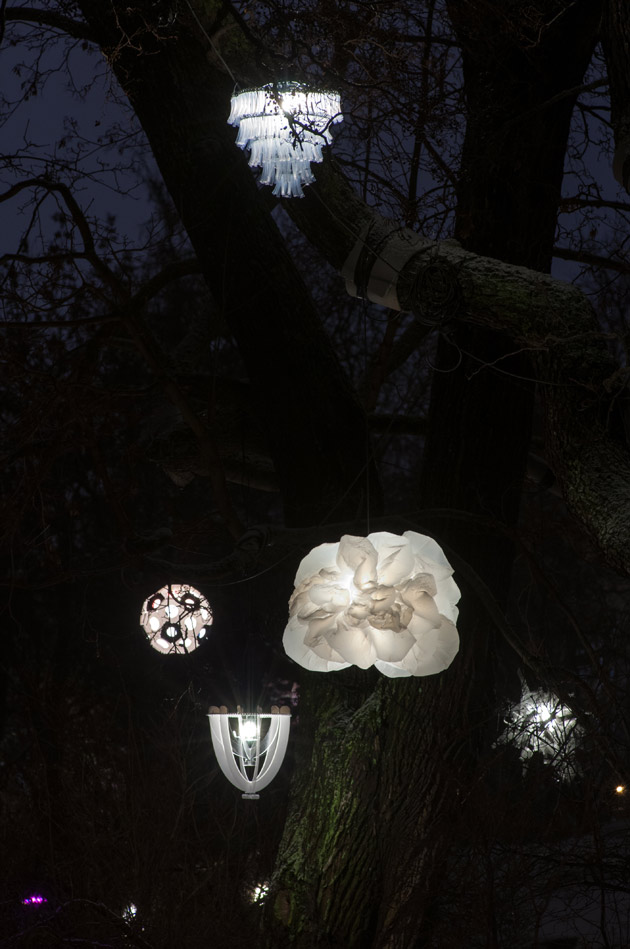 “Lantern Park” is a multi-year project that is growing in scope with each year. The lanterns embrace the wintry park as the sun goes down, with the park’s own lighting adding to the effect. It is a result of collaboration between art and design students from Aalto University, Theatre Academy Helsinki and Helsinki Metropolia University of Applied Sciences, with some lanterns also being created by active professionals.

Many of the installations have been commissioned especially for Lux Helsinki 2013 and cannot be seen anywhere else,” says Professor Markku Uimonen, Artistic Director of Lux Helsinki. 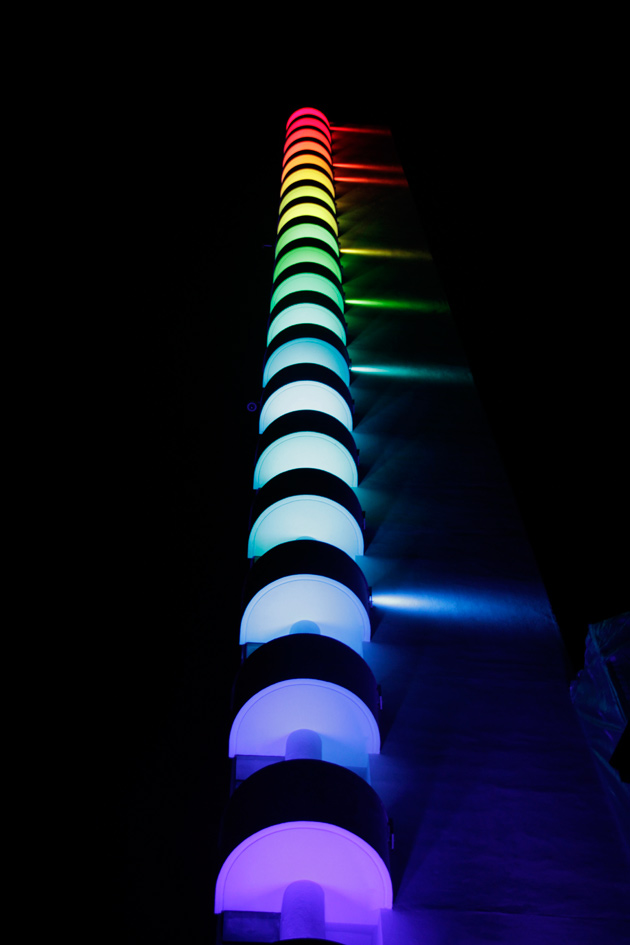 Olympic Stadium Tower the installation “Variant” refers to the complete diversity of the “Spectrum”. A laser beam projected from the top of the tower connects the installations of Lux Helsinki and announces the event to the entire city. The basic colours move towards a white light that eventually fragments into a colourful spectrum – a rainbow, once a symbol of hope. Light Design:Jukka Huitila. Photo: Marita Haukemaa.

Next Inclusive design kicks off Welcome Croatia Festival in London