The story goes that it was quiet in Copenhagen until it wasn't hit by a design storm roused by the INDEX happening and the Design Week. The world's largest prize for design and innovation, INDEX: Award, in the amount of 500.000,00 € for winners in five categories, was awarded on 2 September 2011 in Copenhagen in front of an audience of 12000 people.

Among them were dignitaries like the majors of Helsinki, Singapore, executive directors of global companies, university professors of the best faculties of design, designers and representatives of world media – from 48 countries.

The Plumen 001 offers a new vision for the low energy light bulb, encouraging us to use them out of desire rather than moral obligation. Design: Samuel Wilkinson & Hulger (UK, 2007).

When it was founded 6 years ago, INDEX’s motto was Design to Improve Life, a fresh vision of design as a means of improving, we may even say, the basic existential problems of the majority of people on the planet. The goal was to abandon the conventional and turn towards creative leadership – from tangible to intangible design – from visual communications and product design towards strategies, services and concepts. With this project the Danes have created a global network of interdisciplinary experts, announcing a new principle of design development combined with innovation and its use in solving major social problems of certain communities.

This development has changed the role of the designers who are not passive executors of ordered projects anymore, but initiators. The repositioning of design enabled its humanization and the accessibility of quality solutions to a wider public.

The synergy of communities supporting the new development path

How deeply close the culture of knowledge, innovation and design is in Denmark has also been proved by the fact that the innovative idea of the project was immediately recognized by the Danish government, the City of Copenhagen and the main patron – the Crown Prince of Denmark. Their support is not limited to the financing of running costs of this mega project, but extends to the largest cash design prize of 500.000 euros many Danish companies contribute to. INDEX attracts a record number of creative designers, cities and global companies who want to present their solutions for the categories PLAY, WORK, HOME, COMMUNITY and BODY. Every two years the winner is awarded with 100.000 euros per category. 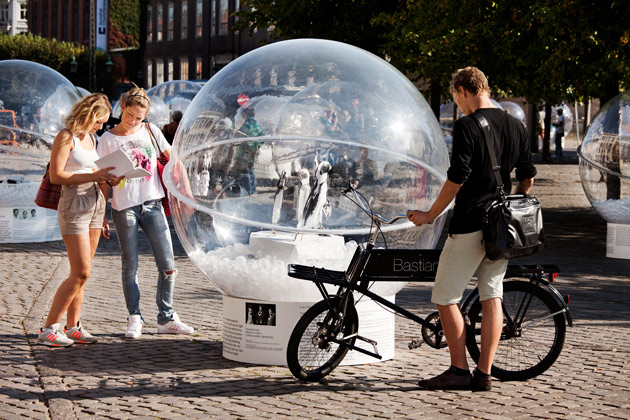 Since her appointment as founding CEO in 2002 Kigge Hvid has been leading INDEX successfully. She was the Design to improve life theme setter at the World Economic Forum and is also a member of the Forum’s Global Agenda Council on Design. At this year’s award ceremony she stressed that INDEX’s idea – Design to Improve Life – has matured on a global level. The first entries were mostly only concepts or ideas, while the comprehensive use of this approach on an international level manifested itself in 2009. That is when the first mature prototypes of entries were presented, as, for example, the electric vehicle.

Kigge Hvid has particularly stressed the following: „Hey, did you notice: An entire industry changed! Today we see a world where most design schools focus at least part of their curriculum on what we call Design to Improve Life. We see design awards having all of some of their categories focusing on Design to Improve Life, we see companies, designers, local and national governments, design centers starting to understand the importance of Design to Improve Life. Today our jury is able to look for proven impact, not only ideas. So the finalist for INDEX: Award this year are many and diverse. Main trends are education, remote doctors and on-line services.“

The winners of INDEX: Award are not famous for traditional design, but rather for design that vastly improves the lives of people all over the world. Among many remarkable innovations, here are the winning projects of INDEX 2011 which witness a new use of design in solving real social problems and conditions.

The second time in a row, the Swiss designer Yves Béhar, founder of fuseproject in San Francisco – is the only double winner in the history of this award. In 2007 he was awarded with a prize for the already famous project One Laptop Per Child, and this year he has fascinated the jury with the project of free eyeglasses for Mexican schoolchildren (6-18 years) – See Better to Learn Better (VerBien).

In some areas in Mexico, as many as 60% of all school children are in need of glasses, and 11% of all school children in the entire country are not learning anything, simply because they cannot see. Verbien is a solution for children in families that cannot afford neither the cost of an eye exam nor the cost of the glasses themselves. In collaboration with designers, glasses manufacturera and the Mexican government free eye exams are offered in schools, and children select and customize their own frames afterwards. The glasses are produced locally, and in no time at all the children receive their new glasses free of charge, courtesy of the Mexican government – and thus receive the opportunity to read, learn and play. More than 100,000 glasses have been distributed throughout Mexico, and 400,000 more are expected to be distributed every year from now on.

In the Mexican city of Monterrey, Chilean architect Alejandro Aravena has turned the traditional approach to social housing upside down and spent 80% of the total budget on buying land in nice middle class areas and only 20% on building the actual houses. And the solution is a ingenious as it is simple: Only half the houses in Elemental Monterrey are not built, but only roofed. 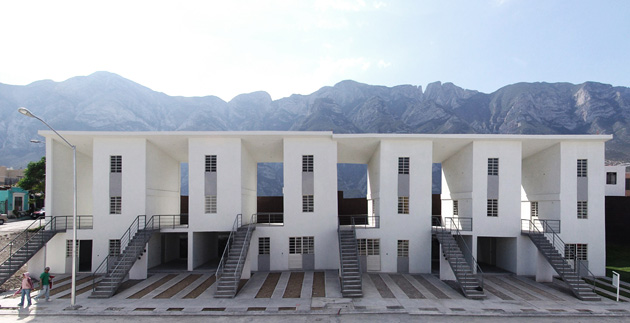 The half that is actually built contains the essentials – all the things you cannot build yourself – namely the foundation, electrical installations, plumbing and walls, and the rest of the house is not built, but is a roofed patio (framed void) that can be filled by the owners according to their own specific needs, capabilities and preferences. A solution that makes it possible to invest public money in desirable building plots, which could silence the existing criticism of social housing – especially the uniform solutions that are not capable of accommodating the diversity of needs, preferences and expectations that people have.

Design for Change from India is  a design based school competition designed to give children an opportunity to express their own ideas for a better world and put them into action. Design for Change is a worldwide movement of young people who want to improve the state of the world, and more than 300,000 schools in more than 30 countries have already been involved in 2011. The competition communicates a very important understanding to children all over the world, namely: “I can. I can be the necessary change. I am useful. I can change.”

Based on remarkable results from Riverside School in India – and now distributed to the whole world – Design for Change aims to make children more competent and less helpless. From challenging age-old superstitions in rural communities and earning their own money to financing school computers or solving the problem of heavy school bags – children are proving that they have what it takes to design the future that they desire. And solid data shows that it is working: Design for change kids not only do well – they do best.

Every year, 30,000 people are injured or die in bicycle related accidents – in Sweden alone. And many of these accidents would have far less serious outcomes, if the bicyclist had been wearing a helmet. But according to a Swedish survey, less than 30% of all bicyclists wear helmets – mainly due to the fact that they do not want to mess up their hair, or because they cannot fit a warm hat underneath the helmet.  Thousands and thousands of bike helmets have been designed, but they all have the same problem: They ruin your hair and do not warm your ears. 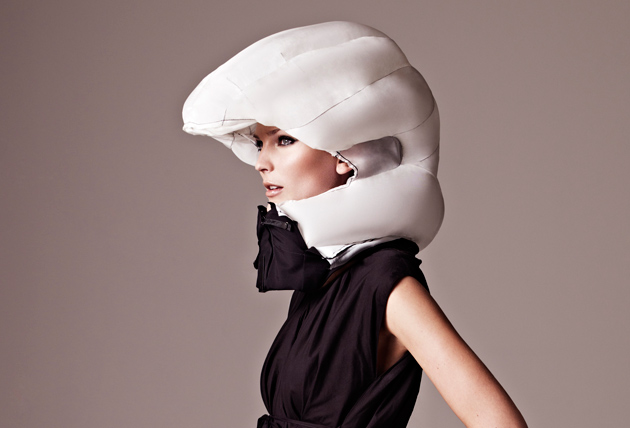 Hövding changed the concept radically. Designers Anna Haupt and Terese Alstin didn’t just redesign the helmet, but they’ve designed something radically different: An invisible airbag that is worn as a collar and inflates only if you have an accident. Hövding is ergonomic, subtle, practical, meets all safety requirements and matches your outfit because it looks like an ordinary scarf.

Design Seoul is  the first ever coherent design based approach to improve life for citizens in  a very large city. The mayor of Seoul Se-hoon stressed: „The central concept of the project Design Seoul is oriented towards the citizens, according to whose needs all policies, hardwares and softwares of the town are organized.“ 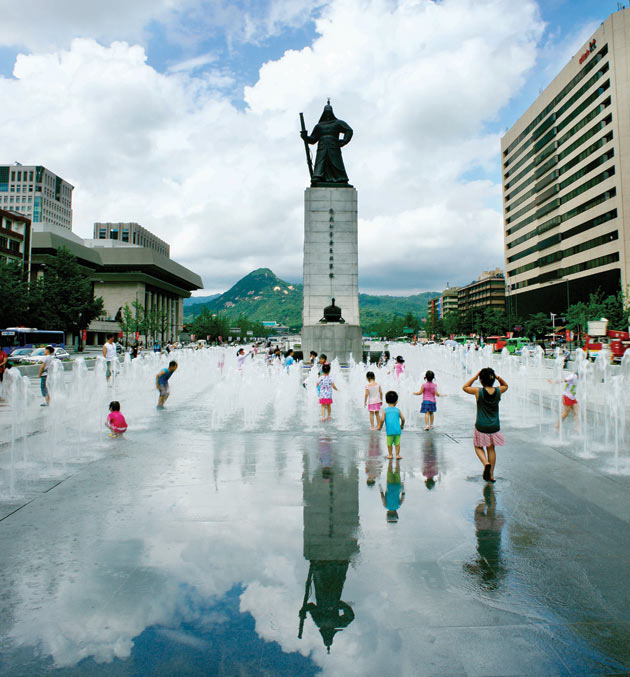 Design Seoul - the first ever coherent design based approach to improve life for citizens in a very large city.

The city of Seoul is very big and is home to more than 10 million people, but this was not always the case: During the Korean War, the city was left almost deserted after the countless bombings. But Seoul rose again and became an important part of what is known as The Miracle on the Han River, where Korea moved from having a GDP the size of Ghana’s to being the 15th richest country in the world. In the years after the Korean War, Seoul rapidly grew wide and tall, and most emphasis was put on securing a roof over people’s heads as well as jobs and basic care. Therefore, there was not a lot of extra focus on beauty, citizen involvement or quality of life, but this is now changing.

Via a design based strategy of Design Seoul, the municipality of Seoul has thus implemented design thinking into the core of the city’s development, and has on the basis of this created numerous fantastic places to meet and live – as well as solving many social, environmental and health related issues in the process.

Nominate design for the biggest of them all – Index:Award 2013