The first actual flywheel of industrial design in Croatia has been Kvadra Design in 2011, whose owner invested 2.6 million euros in the production of upholstered furniture during recession time. Only nine months after starting production, Kvadra Design has won the first Red Dot Award for its sofa bed Revolve.

Kvadra Design launched its first ever collection of 7 sofas in January at IMM Cologne 2012. The presentation’s highlight was the distinctive sofa Revolve designed by Numen/ForUse & Bratović + Borovnjak, and sofa / armchair 3angle designed by Grupa (Filip Despot, Tihana Taraba, Ivana Pavić). After Köln, Kvadra Design entered the global market and currently is purchasable in Germany, Lebanon, Israel and South Korea, while the sales network is further developing. It is therefore the first Croatian company in recent Croatian history that started exporting its final products under its own brand name, signed as Croatian design. 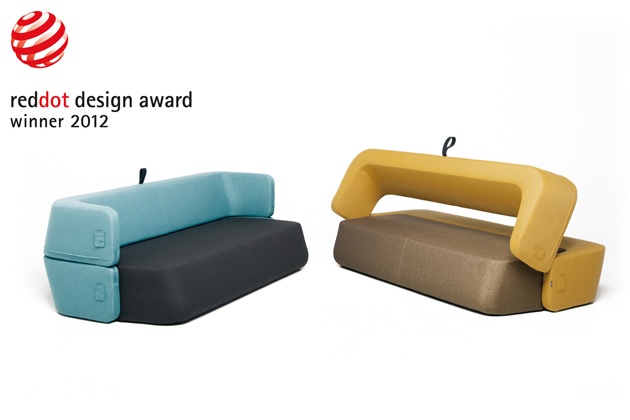 “The company that didn’t seem to have any design potential at the beginning of 2011 became a regional leader in upholstery design. Sofa Revolve is a good example how we have to question our prejudices over and over again. The design competition that Kvadra Design organized for a transformable sofa came in a very busy moment for us, in the mid of 2011. Because of this, but even more because we always search for new cooperations and new energy we invited Ivana Borovnjak and Roberta Bratovic to join our team for the competition. 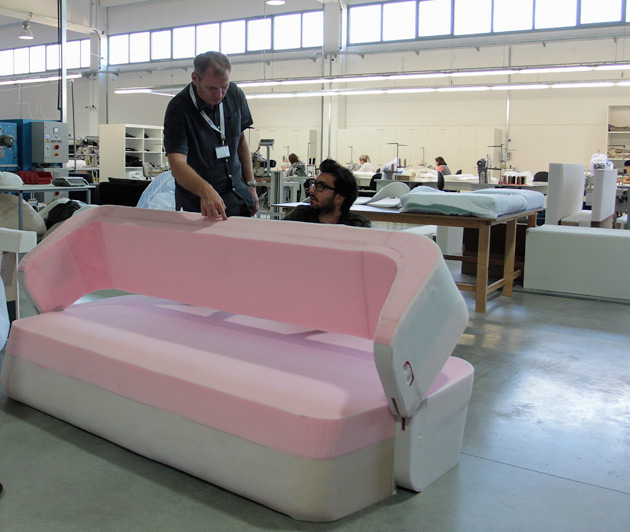 Since we didn’t have any experience with Kvadra Design before, we saw the company as a usual transition enterprise with no real dedication and power for handling tasks which would present a big challenge even to the leaders in the industry such as Moroso or Zanotta. With such prejudices we received the prize for the competition with mixed emotions. Can we develop such a technically complex project with a company with no experience in upholstery, coming from a country whose industry has been thrown to its knees during the painful transition and privatization which occurred in Croatia in the troublesome 90s? 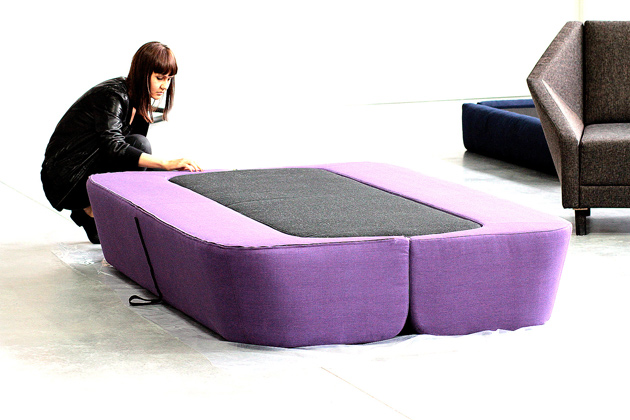 R. Bratović (one of designer's team) with the first Revolve prototype at Kvadra Design factory in Zagreb.

To our big surprise the first prototype was developed in a few weeks, the details and the mechanism developed with Kvadra Design’s technicians proved to work. After only 4 months from the competition and almost a dozen of prototypes, we had the product. We were stunned. And we have been privileged to be a part of it. And admit that our initial constraint was wrong.” – stated Nikola Radeljković from Numen/ForUse.

The Red Dot Award 2012 for the sofa Revolve was not only meant for the product itself, but was proof for the quality standard of Kvadra Design’s production who has opened a wider and long-term platform for the development of design in that part of the industry. Besides, Croats have strongly identified with this brand’s market course, saluting its products, and somehow being proud of the first designed upholstered furniture in the country.

This is how Kvadra Design’s CEO Tomislav Knezović became the first national Design Champion, while the company has demonstrated increased productivity and employment growth by investing into innovation and new distribution channels.

3angle – armchair and two-seater that hugs you

The designer trio Grupa (Filip Despot, Tihana Taraba, Ivana Pavić) has designed for Kvadra Design an innovative collection 3angle, a two-seater and armchair, whose design questions the ergonomic form of the armrest folded in the elbow, which resembles the line of a human arm in a sitting position – thus creating almost a crystal form. Designers have imagined 3angle as a conivival haven for a relaxed and informal way of sitting. They say: “It is an armchair that hugs you”. With the design of 3angle, Kvadra Design has entered the Contract market, furnishing public and business premises. 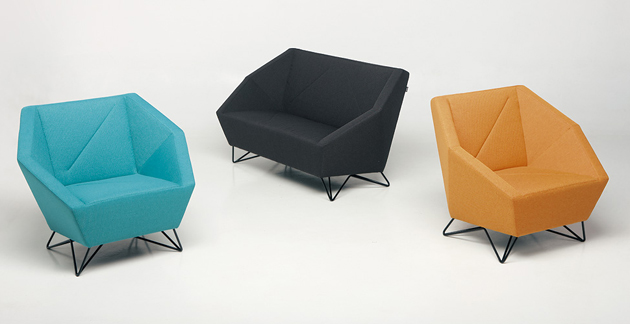 Although the secret ingredient of this company is its leader Tomislav Knezović, who, after the successful development of Perfecta, currently one of the biggest Croatian mattress manufacturers (acquired by Hilding Anders (Sweden), transferred to upholstered furniture led by the vision of creating high-quality products.

“I have founded Kvadra Design out of passion for manufacturing and for high-quality and inspirational products. Yes, we are at the beginning and learning how to use design, making progress step by step, thanks to experienced collaborators in all fields. The Red Dot Award came as an acknowledgment to the investments we have made so far in production development, technology and knowledge, design included.” – said Tomislav Knezović, CEO of Kvadra Design.

At the moment Kvadra Design is finalizing its second Design Competition in search for an innovative, technologically feasible, quality and professionally designed upholstered sleeping and sitting furniture piece. Its results will be showcased first at IMM Cologne 2013, and then, for the first time, next April at the Salone del Mobile in Milan.