Hotel Lone (2011) is an example of focused investment into the quality of an object and its content by designing the identity of a hotel through original furniture and accompanying equipment, which, initially designed for the hotel, can generate a further symbiosis between design and the furniture industry. One of its result is the rise of competitiveness of an industry, as well as all the industries participating in tourism.

Maistra has opened a completely new dimension of meaning regarding the tourist offer in Croatia, not only thanks to the Design Hotel Lone but by renovating other hotels and creating an infrastructure that revives and repositions Rovinj as an attractive tourist destination with a high criteria of quality.

339 million kunas has been invested into Hotel Lone, but credit for the strategic positioning of the hotel into the exclusive chain of Design Hotels TM goes to the endeavors of studio 3LHD, author of the hotel’s architecture, that was recognized by Maistra’s management and CEO Tomislav Popovic at the right moment. 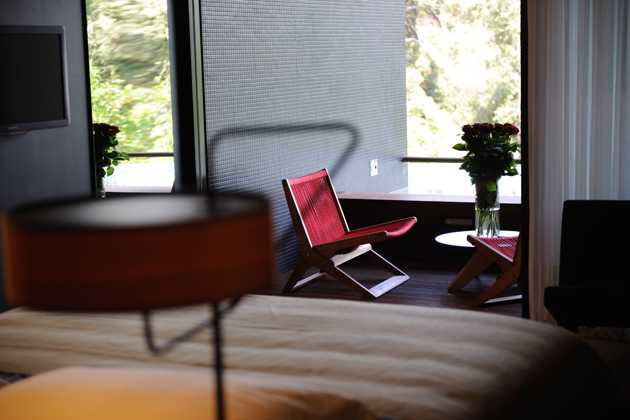 Most of the furniture in Hotel Lone is coming from Element series, with some products specifically designed for the hotel.

This first design hotel in Croatia, is situated in Rovinj’s most attractive tourist zone, in a unique and protected region of the Monte Mulini forest on the Lone Bay. The term Design Hotel is meant to illustrate a space that nurtures the concept of interesting and functional design, in this case created by a team of renowned Croatian creatives comprised of a new generation of architects, conceptual artists, product, fashion and graphic designers. Part of it is the uniqe project by the design brand Element – known for its furniture made of massive oak, mostly implemented in the hotel’s interior. Specifically for Lone, Element has developed a new lamp series, folding chairs and deck-chairs, designed by Numen/ForUse. 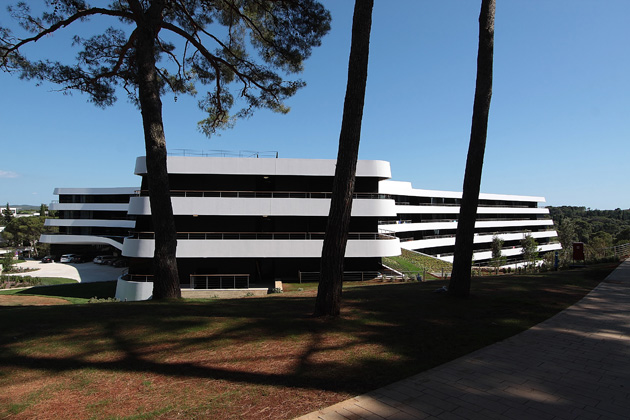 The hotel’s identity is recognized through the external design of the building. Photo: 3LHD.

The surrounding ambiance is the hotel’s signature which also defines all views of the interior. The ambient light and Mediterranean greenery reflect on the glossy surfaces of ceilings in public areas and mirrored panels on the walls in the rooms, pulling them deeply into the interior and intensifying the effect of the surrounding nature. The hotel’s identity is recognized through the external design of the building, with a facade that is defined by dominant horizontal lines – terrace guards designed to evoke the image of slanted boat decks. The site’s complex terrain with dramatic altitude changes determines the location of internal facility spaces through a dynamic interweaving of public areas and guest suites at all levels. 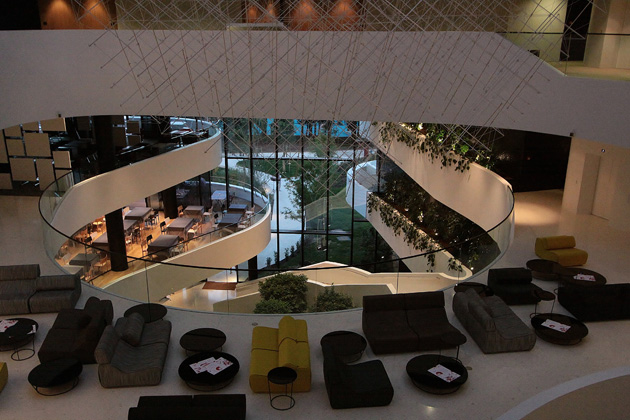 The specific Y shaped ground plan enabled a rational & functional organizational scheme, quality views from all rooms and the grouping of public facilities around a central vertical lobby. In addition to the overall architecture, the interior and the furniture were designed and chosen for the hotel in order to achieve a distinct and recognizable identity. 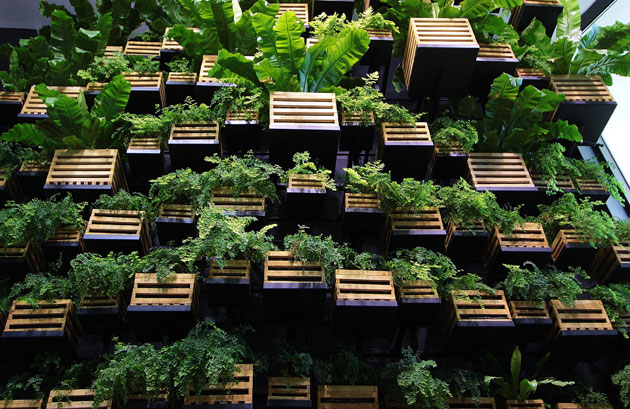 Art installation “In the hanging garden no one speaks” by Silvio Vujicic (hotel Lone). Photo: 3LHD.